Harpers Home Mix Ltd was established in 1992 by the founder, Bill Harper, at Stibb Cross in North Devon. Initially the Company produced coarse mixes and blends. After gaining a good section of that market the Company moved into cubing coarse grist ingredients. Mixing the nuts with other ingredients to form the original Harpers Nutty Mix, this was used very successfully in parlour feeding systems.

In 1997 a new purpose built factory was opened at Holsworthy Industrial Estate in the centre of the North and West Devon milk field, with one of the highest concentrations of dairy cows in the country. The mill is also well situated to serve the three South West moorland regions, all being within one hour travelling time. We deliver throughout Devon, Cornwall, Dorset and Somerset, as well as supplying a network of Merchants.

The mill now runs four press lines with a dedicated line for the manufacture of medicated feeds. This has led to the development of a strong game feed market, based on the very successful pheasant and partridge shoots that enjoy the topography of the South West.

This independent manufacturer became part of the Masseys Feed Group in February 2012. Massey Feeds is a family run business that has been supplying its customers for over 100 years with a strong commitment to agriculture and a reputation for investing in the business.

The Massey Group now has three feed mills. A Mono-gastric mill at Preston and two Ruminant feed mills, one in Cheshire and one here in Holsworthy.

To reflect our on-going commitment to moving with the times and striving for the best, in 2015 we have streamlined our name to Harpers Feeds which more accurately describes the range of products and service we now offer to our customers. 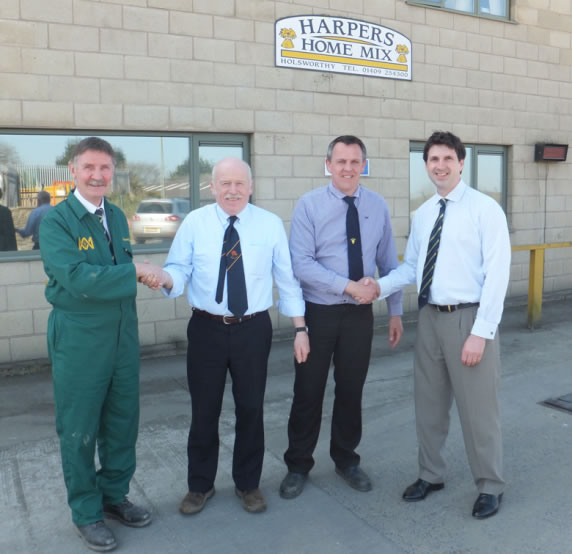 Company Directors: (from left to right):